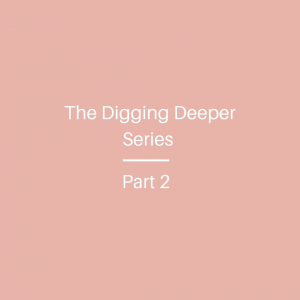 Part Two –  The Tests and Consultations

In the coming months I had a variety of consultations and appointments. Some were helpful, some not so much, but all of them reinforced that there wasn’t going to be an easy answer or singular solution to what was happening in my body.

I had to wade through them and attempt to keep bringing myself back to some sort of presence and mindfulness in the process. I really couldn’t see any clear path forward at all and felt incredibly overwhelmed if I tried to look too far ahead. I had to literally take it one day at a time.

It reminded me of the wonderful quote by Martin Luther King Jr. ‘You don’t need to see the full staircase, just take the first step.’

I kept taking baby steps. One, by one. Tightly holding onto an inner faith that somehow, I would find a way through this.

(You can find Part One to this Series here)

The First set of test results that came in were via the Optimum Health Clinic. I had blood tests done on my Mitochondrial function. Mitochondria are the little power houses inside every cell of the body that make and produce energy, so to me it seems obvious to test these to see whats going on at a cellular level if you have severe chronic fatigue.

The test results showed major issues with the energy production going on at a cellular level in my body. When energy is made inside a cell, it is produced by the conversion of something called ATP and ADP. The levels of these inside my cells were significantly below range across all of my tests.

The tests also showed toxic blockages in my mitochondria at 29% – which basically shows high toxicity in my body and blockages in the production of energy in my cells. One of these blockages showed up as a fungal metabolite which suggests systemic candida overgrowth (a fungus that lives happily in our gut but with certain conditions can develop spores and burrow into our bloodstream/brain etc)

Also showing up in the tests was a severe magnesium deficiency.

I’m not going to go into too much detail explaining the scientific side of all of this, otherwise this post will end up going off on a real tangent, but if you do want more information on Mitochondrial Dysfunction in ME/CFS, Dr Sarah Myhill has done some amazing work in this area. I’ll link to her work at the end of this post.

These results didn’t surprise me, given the crushing fatigue I experience on a daily basis. In a strange way it felt somewhat a relief to be getting test results on paper showing what was happening on a cellular level giving reasons for how I feel. However, I also knew this was just the starts in terms of finding a way forward.

Below are some of my Mitochondrial test results – findings of toxic blockages are circled and some of my abnormal results showing issues with energy production (ATP ADP) are listed at the bottom.  The reference ranges on the right are what the readings should be in a healthy individual, the readings on the left in bold are my results. 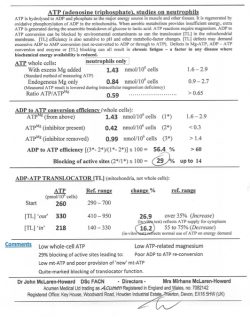 My practitioner at the Optimum Health Clinic gave me some supplements to start taking, to support basic energy production in my body, including a high strength magnesium supplement (tests showed I was deficient in this) as well as a refined general multivitamin and mineral mix. We agreed to keep things extremely simple to start with as my other abnormal blood test results showed a lot more was probably going on beneath the surface and I knew I needed to have further testing on my hormones and such like before I could do any more.

The first hospital appointment I had was with an Immunologist in Leeds. We travelled almost two hours to get to the appointment, which was a huge deal for me given that at the time I could barely leave the house. The consultant listened to me as I tried to explain the excruciating level of fatigue I felt, the endless symptoms and the impact it was all having on my life.  I could see that he acknowledged the severity of my situation and also the abnormality in my blood tests, but because I didn’t fit into an easy box or one simple diagnoses, he bunched everything together and said ‘I think you have just had a severe relapse of your ME/CFS and there is nothing we can do’.

I remember coming out of that appointment feeling so abandoned by the medical profession. How could there be so many people in a similar situation to the one I was in, so incredibly sick, but just left and sent home with shrugged shoulders and no further answers or guidance as to what to do next?

My instinct was screaming at me that there was something else going on beneath the ME/CFS diagnoses, things honestly felt different to years gone by. Like there was a new added layer stopping any progress forward. I knew that if I went home and just did nothing I would continue to deteriorate, but I had no idea who to look to for guidance or help.

I broke down and cried outside the hospital that day. Mum tried to calm me down but I remember just feeling absolutely devastated and totally lost. People were looking at me as they walked past, but I was barely aware of them, it had all gotten too much. No Doctor seemed to know what to do to help me begin to heal and I felt so frighteningly alone with it all. I felt desperately unwell, precious years of my life were passing me by and there seemed to be no medical help or support available no matter how hard we searched. I had no idea how on earth I was going to move forward and it is in moments like this where the fear and overwhelm really can begin to creep in.

A few weeks later I had an appointment with a Gynaecologist in Nottingham. This Doctor seemed to be the first person who realised the seriousness of what was going on and supported me in my opinion that there was more to this than purely ME/CFS alone. After studying my blood test results she said it was clear I had problems with my endocrine system and needed urgently referring to an Endocrinologist, but there were some tests she wanted to carry out in the meantime.

Further blood tests were arranged, and an ultrasound scan of my tummy was done. The results showed multiple cysts on my ovaries and also a marked imbalance in a range of my female hormones. I was given a diagnoses of Polycystic Ovarian Syndrome based on these results and the clinical assessment of some newer symptoms I’d been experiencing too.

I was quite shocked with this completely unexpected diagnoses. One reason being that I had had an ultrasound scan about four years prior to this one and everything had been clear, so that meant the cysts were relatively new. I also didn’t have typical symptoms of PCOS such as excessive hair growth or acne, and up until around the time of the throat infection that floored me, my periods had been regular.

The main reason this diagnoses concerned me was because it showed my body had changed, and was struggling in ways it hadn’t been previously. I was also concerned because PCOS can affect fertility. I am now 35, and haven’t had children yet. Given my current health situation I don’t feel I could consider it any time soon either, so this diagnoses wasn’t what I wanted to hear given my personal circumstances at present. But, there was nothing I could do about it, it was another part of the complex jigsaw I was in the middle of attempting to figure out.

I was (and still am) convinced that the PCOS is a downstream affect of other things in the body and is something I am aiming to reverse and heal in time through natural methods.

By the time my appointment with the Endocrinologist came round, I was still feeling dreadfully unwell. I remember needing to keep my eyes constantly closed whilst I sat in the waiting room with Mum beforehand, due to the overwhelming exhaustion and the pain in and around my eyes and brain. My consultant broke up my appointment into two 45 minute sections so I could rest in between, but even with that, I struggled to stay upright throughout. I was glad Mum was by my side as I found it really difficult to take in everything he was saying.

The Doctor was a friendly man, who after looking at my blood test results and speaking to me about my symptoms,  said that it was clear there were issues with my Endocrine and Hormonal System. He highly suspected a Pituitary Tumour. The Pituitary Gland is the Master Gland of the entire Endocrine system and sends signals to the Thyroid, Adrenals, Ovaries and also controls hormones such as Prolactin, all of which were not working as they should be and showing up as functioning abnormally on both scans and blood tests.

When I was told a Pituitary Tumour was suspected, apart from the obvious anxiety about possible surgery, I felt relieved. Could you imagine? Something that could be treated. This could potentially mean chance of a clear path forward, some treatment and hopefully many of my symptoms being relieved. I wasn’t under the illusion that all of my health problems would miraculously go away if it did turn out to be this this, as I knew the reality of ME/CFS, but i definitely had hope that I might be able at least improve somewhat and be able to continue with my recovery path in the way I had been until this new cascade of symptoms had come crashing into my life. It was like a little ray of hope. Something to cling on to in the maze that so far had lead nowhere.

This series will continue with Part Three – ‘Further Consultations and Digging Deeper’. You can find Part Three Here… 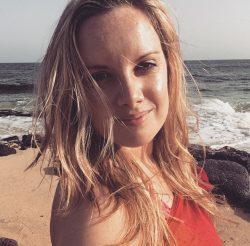 Would you like to be the first to hear about brand new Consciously Healthy blog posts?

If you would enjoy having new posts sent directly to you, just pop your email address into the subscription box (you’ll find it either below this message or in the sidebar depending what device you are using).  New blog posts are sent out every couple of weeks or so and it goes without saying, your email address won’t be shared with any other parties.

I’d love to have you as part of the Consciously Healthy Tribe!

Make sure you look our for your welcome email. Some people find it sneaks into their junk folder, so just keep an eye out and mark Consciously Healthy as a safe contact if this happens so you can continue to receive future posts to your inbox.

Disclaimer: This Website and all the information which it contains is based on my own personal experience and health journey which I am sharing for educational and informational purposes only. Please consult your own doctor or healthcare provider to determine the best course of treatment for you.